Revitalize your city’s probably-terrible public transit system with a new and unexpected source of funding!

In many cities, there is no substantial funding for public transit. This results in extremely poor service (routes with minimal coverage of the city and few buses). This leads to a “death spiral” where people stop taking the (terrible) public transit, the service gets even worse, and so on.

These problems can, in theory, be fixed with enough money, but who wants to pay for it?

There is a simple way to encourage companies to pick up the tab for public transit. Currently, advertising is the only method of obtaining private funding for buses, but maybe we need to think of some other options.

Consider the bus route in Figure 1: 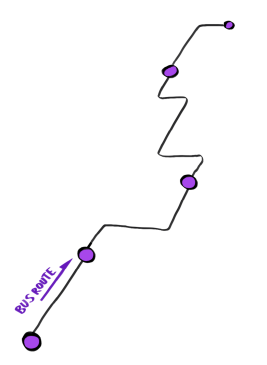 Fig. 1: Here is a default bus route, before it is changed it due to corporate sponsorship. Circles indicate bus stops.

In order to entice a company to help pay for this bus line, we’ll let the company have some influence over where the buses go!

This could result in several possibilities, including:

Possibility 1: A bus route could be “detoured,” with a new stop added in front of a specific business (Figure 2). This would bring new customers to the business, and allow the business’ existing signage to reach more eyeballs.

Fig. 2: If a chicken-themed fast food restaurant sponsored this bus route, the final route might be detoured as shown. Although the route might take a few minutes longer, the passengers would be delighted by delicious and economical fast-food chicken!

Possibility 2: One or more bus routes could be re-routed so that the route itself spells out a company name or slogan on the map. Since these routes would show up on online map searches for transit routes, the chosen phrase (e.g. “CHICKEN_4_LESS”) would be shown to countless map-viewing individuals, even if they didn’t end up actually taking that specific bus.

Possibility 3: As a more nefarious option, the sponsoring company could route the buses around competing businesses, rather than toward their own.

This is a great way to fund public transit that does not require city bonds or taxpayer funding.

CONS: Might slow down buses a lot, since these chicken-vendor-based routes are unlikely to be optimal for commuters.

Motel-on-the-Move: The incredible secret to affordable housing in every city! Why are you still paying rent or a mortgage?

Housing is incredibly expensive in many major cities.

Some people try to cope with high housing prices by living in their cars.

However, it is generally illegal to sleep in a parked vehicle. Additionally, there are often restrictions on vehicle height for parked vehicles.

None of the caveats above apply to a moving vehicle.

The “Motel-on-the-Move” is a standard tour bus that has been converted into a mobile housing development. By partitioning the bus along its length (like an old railroad sleeper car, or a Japanese capsule hotel), somewhere between 8 and 48 miniature housing units could be fit into a single bus.

This bus would constantly drive around the city, on a set route, to accomplish two goals:

1) By avoiding parking, the inhabitants would not be in violation of city ordinances prohibiting habitation in vehicles.

2) By traveling through the city, the bus-dwellers could obtain door-to-door service to their places of work. The bus’s route could be optimized for the specific inhabitants.

Additionally, there might be tax implications; perhaps the bus could spent part of the year in locations with lower tax rates, allowing the residents to potentially benefit from reduced income tax rates.

Fig 1: The “Motel on the Move” would be a converted tour bus that would constantly drive throughout a high-rent city. Each door here in the diagram (blue doors on the “ground” level, yellow doors on the “mezzanine”) corresponds to a single extremely cramped studio apartment. 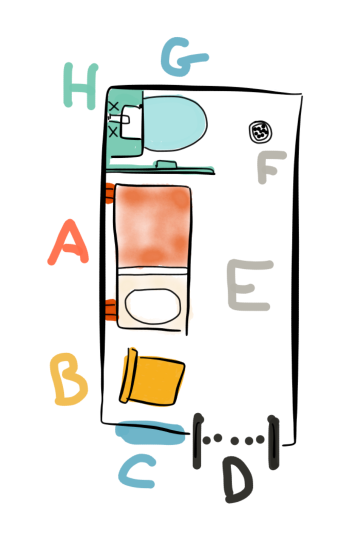 Fig 2: A hypothetical floor plan for each unit. A): A bed that can be folded against the wall. B) A convenient window-side chair for reading. C) A window to the outside. D) Apartment door. Opens directly onto the street. E) Extra space for shelves and/or folding tables. F) A drain in the floor. Area “F” doubles as an extremely-low-flow shower. G) Toilet. H) Sink, above the toilet, for maximum space efficiency. A shower head on a flexible nozzle would also allow for showers to be taken in the F-G-H area of the apartment. Resident water usage would have to be strictly limited due to space and weight constraints on the bus.

Fig 3: Units could be crammed together vertically by taking advantage of the fact that a 7-foot ceiling is not absolutely necessary across the entire unit. Above, a red unit is stacked on top of the blue unit. In the blue lower unit, the low-ceilinged area on the left would contain a bed (like the bottom bunk on a submarine). In the top unit, the bed would be on a “platform” (really the ceiling of the blue unit) on the right.

The cost of running a bus 24/7 and paying for a driver (or scheduling the residents to drive it) might offset some of the rent savings.

PROS: Could stimulate the automotive industry. Capsule hotel industry can serve as a template for obtaining venture capital funding.