Revitalize your city’s probably-terrible public transit system with a new and unexpected source of funding!

In many cities, there is no substantial funding for public transit. This results in extremely poor service (routes with minimal coverage of the city and few buses). This leads to a “death spiral” where people stop taking the (terrible) public transit, the service gets even worse, and so on.

These problems can, in theory, be fixed with enough money, but who wants to pay for it?

There is a simple way to encourage companies to pick up the tab for public transit. Currently, advertising is the only method of obtaining private funding for buses, but maybe we need to think of some other options.

Consider the bus route in Figure 1:

Fig. 1: Here is a default bus route, before it is changed it due to corporate sponsorship. Circles indicate bus stops.

In order to entice a company to help pay for this bus line, we’ll let the company have some influence over where the buses go!

This could result in several possibilities, including:

Possibility 1: A bus route could be “detoured,” with a new stop added in front of a specific business (Figure 2). This would bring new customers to the business, and allow the business’ existing signage to reach more eyeballs. 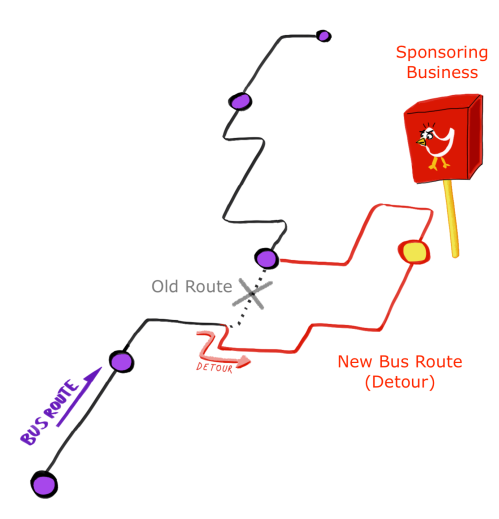 Fig. 2: If a chicken-themed fast food restaurant sponsored this bus route, the final route might be detoured as shown. Although the route might take a few minutes longer, the passengers would be delighted by delicious and economical fast-food chicken!

Possibility 2: One or more bus routes could be re-routed so that the route itself spells out a company name or slogan on the map. Since these routes would show up on online map searches for transit routes, the chosen phrase (e.g. “CHICKEN_4_LESS”) would be shown to countless map-viewing individuals, even if they didn’t end up actually taking that specific bus.

Possibility 3: As a more nefarious option, the sponsoring company could route the buses around competing businesses, rather than toward their own.

This is a great way to fund public transit that does not require city bonds or taxpayer funding.

CONS: Might slow down buses a lot, since these chicken-vendor-based routes are unlikely to be optimal for commuters.