Never be frustrated by a slow download again, thanks to this new “file download” interface that will give you a newfound appreciation of even the slowest download speed! A new and improved semi-“skeuomorphic” user interface paradigm.

Sometimes, it seems like a file is taking forever to download (or copy). A speed of 160 kilobytes per second may seem excruciatingly slow, but that’s actually an entire late-1970s floppy disk (Figure 1) per second.

Fig. 1: This is the type of floppy disk that is legitimately floppy, not the 3.5 inch “floppy disk” that is immortalized in the “save file” icon and “💾” emoji.

Instead of just showing a slowly filling up progress bar when downloading (or copying) a file, a computer should show an animation of old floppy disks flying across the screen (Fig 2).

Fig. 2: These zooming floppy disks make it clear that a LOT of data is being copied.

This will help emphasize how much data is actually being copied: potentially hundreds of floppy disks per second!

Think about how much faster a copy would seem if it were presented in this fashion, instead of as an incredibly slowly-filling-up progress bar.

Instead of showing just the number of floppy disks per second, the file copy could be represented as a number of monks transcribing the file onto an enormous vellum scroll. 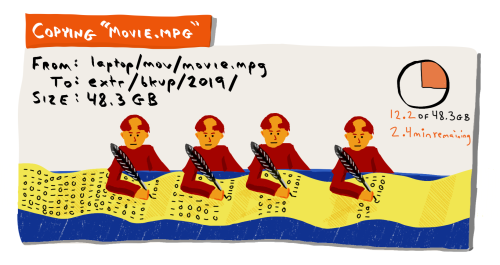 Fig. 3: Over 1.3 million monks would need to be rendered (shown here: 4) in order to accurately depict a 10 megabyte/second copy speed.

That is probably too many monks to display on a screen at once, but the screen could slowly zoom in and out of specific regions of this enormous scroll-copying effort to really give the end user an appreciation for the effort involved.

PROS: Gives an impatient computer user a newfound appreciation of how fast their data transfer really is.

CONS: Spending so much processing power on rendering images of monks copying a file might negatively impact both battery life / energy efficiency and file-copy speed.