The idea of being able to mix-and-match different components of a mechanical device to fit the job at hand has been around for a while.

There is even a project to demonstrate how this idea would apply cell phones: https://en.wikipedia.org/wiki/Project_Ara

But the idea of being able to mix-and-match different parts has, surprisingly, never been applied to cars.

Instead of having to over-buy your car / truck for the largest job you might need to use your car for (“maybe I’ll need to move a bunch of furniture, I’ll get a large truck”), instead you could just buy a modular car and switch out the modules in question.

For example, if you bought a small 2-door car but find that it has insufficient space, you could swap out the rear half of the car for a larger four-door model.

Similarly, if you find your large station wagon is too difficult to park downtown, you could swap out the back half with a tiny trunk module. 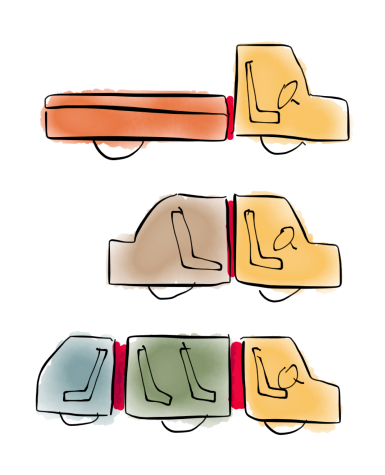 A user could switch out modules as desired, without the need for any mechanical expertise, due to standardization for the connections between modules (shown in red in Fig. 1).

This is not only a great idea, it was even briefly demonstrated in the James Bond movie “The Living Daylights” (car number VAZ-2106). See time 0:57 on Youtube here for a visual example.

PROS: Now you won’t need two cars, you can get away with… one and a half cars?

CONS: A side-impact collision would probably cause this type of car to explode into its component modules.