Even the tiniest portion of food will feel satisfying when it looks like a huge meal! The one weird trick that cost-cutting dining establishments don’t want you to know!

TITLE: Even the tiniest portion of food will feel satisfying when it looks like a huge meal! The one weird trick that cost-cutting dining establishments don’t want you to know!

Food is delicious! Consequently, it’s too easy to eat too much of it.

The first part of the solution to this issue is straightforward, and has been with us since the days of Sherlock Holmes—use a magnifying lens (ideally placed in a fixed location on the table, in front of the individual who is dining) to make the food appear larger.

As unscientific speculation, this could:

Fig 1: By magnifying this tiny hamburger (seen here with a U.S. quarter for scale), the hamburger-eating individual’s brain may be deceived into thinking the meal is much more filling than it actually is.

The key brain-deceiving component of this plan is the special utensils. If the user merely sees a magnified hamburger, but interacts with it with their normal-sized hands, they will immediately realize that it is actually a tiny hamburger.

But if the fork and knife are also tiny, they will appear normal-sized through the magnifying lens. Then the user must only take care not to observe the food as they move it outside of the magnified region (perhaps by being distracted by watching TV at the same time), and the illusion of normal-sized food is preserved. 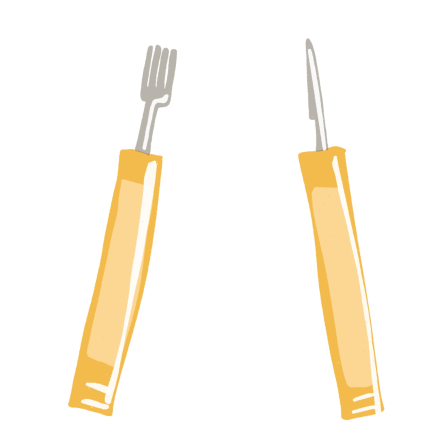 Fig 2: Although the utensils (here: fork and knife) have normal-sized handles, the end of the utensil is 1/8 the size of normal, so it will appear the “correct” size through the magnifying lens.

This is a great idea which will soon be seen in the fanciest restaurants as both a cost-cutting and health-promoting measure.

PROS: Allows food to be prepared more cheaply, since there will be less of it.

CONS: May lead to starvation if used injudiciously.