Sometimes there is no way to know certain aspects about a person’s character without putting them in an unlikely scenario.

For example, you might want to know: “What would the new mailroom clerk do if a dinosaur was rampaging in the hallway?”

Sadly, there is no easy way to determine the answer to this question. And if there was, it would probably get you arrested.
The idea:

An organization can set up unusual scenarios for testing the mettle of an individual.

This could have many uses:

Employee hiring: “Is the new job candidate a stand-up individual who would help a stranded motorist change a tire, or would they drive on while cackling maniacally?”

Dating: “Would my date attempt to save me from a killer clown, or would they run the other way without even glancing over their shoulder?”

National security: “Would the new agent betray the country for a huge sack of money with a dollar sign on it?”

PROS: Could answer many hypothetical questions in a controlled and more-or-less safe environment. Don’t leave it up to amateurs to answer questions about killer clowns in a dangerous fashion!

CONS: None come to mind.

Here is a boring update to the previous elevator idea:

When someone presses the “call elevator” button, the next elevator traveling to that floor (in the correct direction) will stop to let that passenger on.

However: sometimes an elevator is COMPLETELY FULL, yet it stops at the floor anyway. 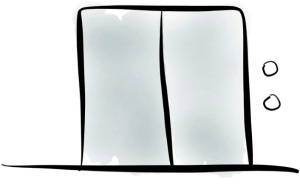 This is just a waste of time for everyone: the current occupants are delayed, and the person who pressed the call button just has to press the button again to summon a new (hopefully empty) elevator.

Install a grid of “electric eye”-style detectors on the elevator ceiling. If enough of them detect an obstruction (for example, a passenger) below, the elevator will be declared to be “full.”

Then, the declared-as-full elevator will not stop on a floor where the call button has been pressed unless a current occupant is also getting out on that floor.

PROS: All of them!

CONS: None of them!

There are a number of crimes that make no sense from a cost/benefit analysis standpoint.

Example: armed robbery of individuals on the street: this involves a high chance of 5-10 years in prison, but the maximum payoff is probably around $500. Expected value: strongly negative.

Even a bank robbery typically has a paltry total take (perhaps one year of income per robber), yet still has a high chance of resulting in arrest.

The theory: fewer crimes would be committed if the prospective criminal actually weighed the benefits and risks of the to-be-committed crime.

Proposal: prospective criminals should be encouraged to write up a “Crime Business Plan” in which they detail their proposed crime, the benefits that they stand to reap from it, and the potential negative consequences.

The method of encouragement is as follows:

If a criminal has written up and submitted a “crime business plan” to the city, and that criminal is also convicted of the crime described therein, then the sentence is reduced by 50%.

Fig 1. Crime business plan is written up. On a scroll, apparently.

Fig 2. Crime business plan is sent by mail to City Hall, where it is registered and filed away for safekeeping.

Fig 3. After the crime is committed, the criminal is caught, convicted, and sentenced, but the sentence is reduced by half.

Mr. X wants to steal a safe. He writes up a plan, indicating that he assumes the safe will have 1 million dollars in cash in it, and that the chance of detection is only 5% during the burglary, and 1% afterward. (He plans to be very careful about spending his windfall.) He shows that the expected value of the crime is POSITIVE for him.

After writing up the crime business plan, he mails the letter to City Hall, which accepts it, sends him a confirmation code, and files it away.

Later, Mr. X commits the crime, but is immediately caught and goes to trial. He defends himself admirably but is convicted and sentenced to 14 years in the salt mines.

However! Now he exclaims “But I filed a crime business plan, to show that this was a well-thought-out idea!” The court will verify that the described crime in the filed-away business plan was in fact the one committed, and his sentence will be reduced by 50%.

Why this is a great idea:

By heavily incentivizing individuals to ponder their crimes, they could:

1) Be less likely to commit crimes of passion (Example: “I’m so mad, I’m going to kill you—but first I have to file the paperwork in triplicate and wait 6 to 8 weeks!”)

2) Be less likely to commit crimes that have a strongly negative expected value (Example: robbing a fast-food restaurant).

3) Be less likely to commit certain premeditated crimes (“I’m going to beat up my neighbor for putting his fence too close to my property! Wait, while I was researching my crime business plan, I discovered that I can actually take this case to arbitration and resolve it that way.”)

PROS: Might result in less crime. The business plan aspect will employ legions of lawyers who would have otherwise turned to crime in desperation.

CONS: Other countries might become jealous of this new legal system.

This blog is intended to have only the worst ideas.

If you encounter any idea that is not the worst, please disregard it. It was no doubt posted in error.

The solution: a light on the doors that indicate whether the arriving elevator is occupied or not. Or you could even have just a small window.

Bonus secondary solution: the doors themselves could indicate whether the elevator is going up or down.