Daily recap: One weird all-seeing-eye trick to staying focused on your goals

TITLE: Daily recap: One weird all-seeing-eye trick to staying focused on your goals

People currently carry cell phones that have the ability to record nearly all aspects of life.

Soon, this self-surveillance will become even more all-encompassing, as people wear watches / lapel pins / fake flowers / whatever with integrated cameras and heart rate monitors. Nothing will be hidden from the all-seeing eye of THE CLOUD.

Fig 1: A hypothetical wristwatch with an all-seeing eye on it. The eye just watches the wearer 24/7, silently judging. Remember to charge it every night!

Interestingly, the “Telescreen” from Orwell’s 1984 actually gathers less information about a subject than a modern cell phone! For now, we will skip over the obvious dystopian applications for this technology.

1) The watch monitors its wearer at all times, and extracts a few clips of “interesting” things that happened during the day.

2) Then, overnight, it creates a 30 second video montage, complete with a dramatic voiceover narrating the highlights of the day, like one might see in a TV show with a continuing multi-episode plot.

3) When the watch-wearer wakes up in the morning, they are greeted with a “last time in: your daily life” video.

“LAST TIME IN: YOUR LIFE:

Fig 2: In order to obtain this information, the monitoring software could examine your GPS location, heart rate, step count, etc. Presumably it could look for interesting combinations of data that had not occurred before, and those would (hopefully) result in a useful recap of the previous day.

PROS: Could motivate the user to stay focused on their goals by providing continuity with their actions from the previous day.

CONS: Depending on the user’s daily routine, the “daily recap” might eventually find nothing interesting. “Highlights from yesterday: you microwaved a frozen meal and then watched a Youtube compilation of car crashes.”

Immigration reform: “give one, get one”

The free transit of people across borders has historically been prevented by various restrictions, both from the sending country (the requirement to grant an exit visa) and the receiving country.

In most cases, legal immigration is an arduous process for individuals without esoteric skills or extensive financial resources.

Fig 1: “I want to move to the red country. But their immigration procedure is too restrictive.”

Fig 2: “I want to move to the blue country, but they claim they’ve already gone over their quota of immigrants from my country.”

But what if anyone could permanently move to any destination country, just as long as they found a “replacement” citizen to take their place in the origin country?

With this proposal, countries would be freed from both:
1) A sudden influx of new citizens burdening their social services
2) An exodus of its population to other countries

We can refer to this proposal as “mutually agreed population-neutral citizenship exchange.” Or: “give one / get one.”

Any pair of individuals in two countries may swap citizenship, just as long as they both agree. There are no restrictions, and this exchange is permanent (unless both parties agree to swap citizenship again).

Clearly, some countries would be in more demand than others, particularly those with strong unconditional governmental support systems (e.g., free college, government stipends, etc.). Perhaps this would be handled in a “free market” fashion by allowing citizens of less wealthy countries to provide their own economic incentives for a swap.

Fig 3: “We swapped our passports and citizenship papers. Problem solved!”

For example, a nomadic farmer might offer 15 cows and a finely-constructed yurt to a nature-loving American in order to incentivize the exchange. Or a prince in a foreign land might offer his position to a foreigner in order to escape the burden of being hounded by paparazzi.

It is possible that a criminal might attempt to find citizenship in a country without an extradition treaty with the original country. This could increase the non-extraditing country’s “citizenship-swap value” even if its economic and political situations were inferior to that of the country of origin.

PROS: Allegedly, the free movement of labor is beneficial to the global economy. Might result in some amazingly hilarious predicaments that would make for entertaining television.

CONS: How could it go wrong?

Due to the high degree of safety in modern society, the idea of what is “safe” vs “dangerous” has changed. As overall safety increases, people begin to see previously-acceptable situations as dangerous. This cycle may continue as time goes on, unless action is taken.

This concept is perhaps most evident in the increasingly conservative construction of children’s playgrounds, where even the humble swing set is under threat of removal due to its perceived danger. 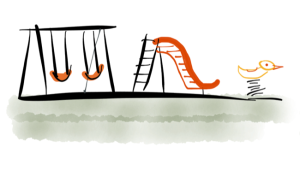 Fig 1: Example of a playground.

A possible solution to this safety-to-danger perception treadmill:

In order to re-calibrate people’s perception of safety and danger, we suggest providing an extremely dangerous situation in juxtaposition with a “normal” situation. This way people can get a proper grasp of the full range of possible options for safety / danger.

Fig 2: Example of something that would generally be regarded as “dangerous” across all human cultures.

Specifically, the idea is to have a playground with a “normal” section and then a (possibly fenced off) deadly snake pit.

This would allow both adults and children to realize that the deadly snake pit was “very dangerous” and that the swing sets were relatively safe in comparison. No doubt this new realization would also pay dividends in many other aspects of life. Education is very important!

Fig 3: Artist’s rendition of the final “safety and danger” playground.

PROS: Would help provide useful perspective on the degrees of safety and danger in modern society. Would help children learn the various degrees to which something can be dangerous. Additionally, would provide employment for hard-working snakes.

CONS: It’s hard to imagine any downsides or problems to this proposal.

There are a number of popular computer games that take place in forbidding environments—in a blizzard atop a snowy beak, or inside a volcanic caldera.

However, there is no way of conveying the real feeling of temperature to the player. In a game like Skyrim, the player will be no worse for the wear even after blithely trudge through a blizzard for hours wearing only the medieval equivalent of a T-shirt.

Fig 1: Some kind of cold place with both penguins and igloos. Maybe a zoo in the arctic. Geographically questionable. Immersion: ruined!!! 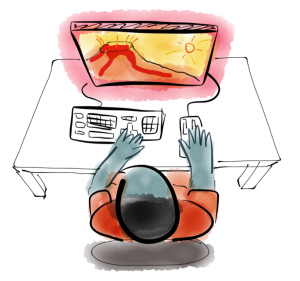 Fig 2: Volcanic Caldera. Still a comfortable temperature at the desk, however! Immersion: ruined!!!

Games could have an interface to an array of different environment-affecting applicances. For example: a fan, an air conditioner, a space heater, and one of those supermarket mist-ers for keeping vegetables fresh.

When playing a game and wandering about on an icy mountain peak, the air conditioner and fan could both be going full blast, prompting the player to find shelter inside a tavern with a roaring fire (which would engage the space heater).

Perhaps in games with a protagonist who can swim, the supermarket mist-er could continually spray on the player while they were in the water. Realism!

Rare ones that already exist:
* Pain via electric shock (as seen in the dubious “PainStation” invention: http://en.wikipedia.org/wiki/PainStation)
* Orientation / tilt (for professional flight simulators)

Suggested additional features that could be accomplished cheaply:

Fig 3: A set of fans could be used to give the impression of motion, as well.

It might be possible to just integrate temperature control into the controller using the Peltier heating/cooling effect. Or perhaps a vest that the player could wear, so as to provide a more complete experience.

Fig 4: Maybe the mouse could be heated / cooled for a faster-to-heat-up/cool-down and more cost-efficient system? That is supposed to be a mouse, by the way.

There is a possibility that sufficiently determined players might actually freeze to death while playing games, but natural selection should solve this problem within a few hundred generations.

A partial list of moddable games in which the temperature of the environment could be an important factor:
* Skyrim
* Fallout
* Minecraft
* Terraria

A simple version of this concept could be implemented with a mod plus a USB-controlled power strip.

Fig 5: Just plug this space heater into your USB-controlled power strip, and you can have it cook you whenever the computer commands it.

PROS: Would add a new immersive element to the multimedia experience, the likes of which have not been seen since the demise of “Smell-o-vision” in 1960.

One Weird Planet You Must Visit On Your Next Vacation, Assuming Your Vacation Involves Traveling Through Space

Many people are fascinated by the idea of interplanetary travel.

It may seem initially appealing: you travel between the stars in your spaceship, and periodically land on interesting planets to poke around and see what wonders they have to offer.

Fig 1: Travel across the galaxy

But, imagine the reality of it:

Even if it were as convenient to travel to other planets as to take a plane, here’s what you would do once you actually got there:

1) You would put on an enormous and bulky spacesuit.

2) You would walk around on a desolate plain, perhaps kicking a rock or two.

3) Admittedly, you might have some fun in a low-gravity environment.

The reality of the situation is that you would generally be limited to a featureless expanse of frozen (or boiling) terrain, and you would be stuck in a huge life-support suit.

Things you will never encounter:

1) A civilization that has inexplicably progressed to become an exact copy of 1920s-era Chicago.

2) A planet inhabited by the descendants of Earth’s dinosaurs.

3) A giant planet-wide computer that only you can stop from terrorizing the galaxy.

In conclusion, the reality of interplanetary travel would be more expensive, dangerous, time-consuming, and ultimately incredibly boring than any destination on Earth.

So imagine this alternative approach:

We rig up a standard-sized cargo container to seem like a spaceship on the inside. It will have a bunch of flat panel viewscreens, some amenities of space, and (naturally) artificial gravity set to Earth-standard 1.0 G.

We load the cargo container onto a regular 18-wheeler truck, which then takes it to interesting destinations on Earth. While en route, the flat screen would display suitably convincing hyperspace travel graphics to give the sense of motion.

Fig 3: Get driven from landmark to landmark

Fig 4: Wander around a national park in a hilariously bulky and unnecessary spacesuit

From inside the “ship”: “Set a course for the scorching desert world Gamma V.”

From outside the “ship”: “Drive the truck to Death Valley.”

Ideally, the cargo container would go on a route with a number of interesting features in relatively close proximity.

The occupants could wear bulky spacesuits for their “planetary excursions” and communicate with each other by radio.

PROS: Provides a superior experience to actual space travel at a fraction of the price. Avoids attracting the attention of nameless horrors that lurk beyond the stars.

CONS: As is no doubt evident, there are none!